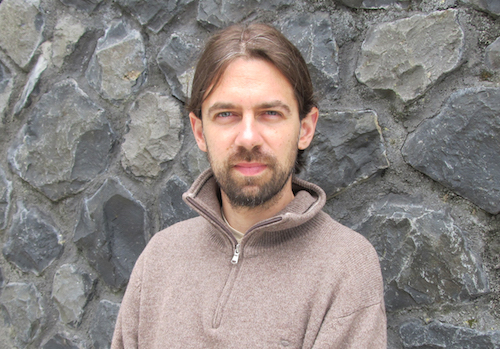 Martin Loridan graduated from the Paris Conservatoire (CNSM). His catalog includes works for Orchestra, Concerto as well as Chamber and Vocal music.

His works investigate the role of gesture and its visual/acoustic impact. By integrating acoustic/physical/human phenomena such as breath, air, vibration and space, his musical language explores the borders between instrumental performance and human perception.

His current projects include the composition of a cycle of chamber/solo pieces involving the use of amplification. He currently pursues a PhD in composition (practice-led research) at the University of Leeds (UK). His works are published at BabelScores.

Spectres d’ombre explores the interactions between souffle (air and breath), gesture and resonance.

The work explores the possibilities of a musical language of the before  and the after, made of what precedes  and what follows  the sound. The human breath is omnipresent during the work and contributes to the acoustic/physical exploration of vibration.

The use of the instruments’ bodies as rich sonic resources “reinforced” here by a micro-tonal tuning allow multiple spectral/harmonic combinations able to generate complex textures made of souffle, resonance and vibration. The work also aims to introduce a reflection on the choreographic impact of extended techniques. Two “cadenza” sections (cello and piano) develop spectacular double gestures (pizzicati in front  and behind  the fingers, opening  and closing  the keyboard cover).

Souffle is ultimately developed towards a “circulating breath”, a vocal-instrumental process in which the instruments’ sound and the performers’ voice are merged. As the work ends, the silent gestures remain the only element, engaging into a reflection on the borders between the cycle of respiration and the gesture(s) of silence.

This work was awarded the 2017 “Prix André Jolivet”.