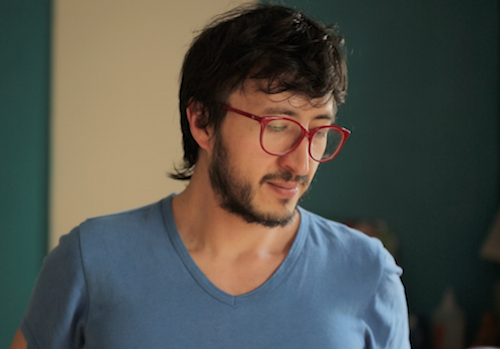 His pieces have been played in music festivals in Europe and the Americas and Asia, by ensembles such as L’instant donné, Ensemble Caïrn, Ensemble Abstraï and the KNM Berlin. He also participated in multimedia projects at ZKM and the Royaumont Abbey. His work received several awards (Mincultura 2002, Köln Trienale 2010, BBVA 2012). In 2012-2013 he took part of the Ircam Cursus for composers. In 2014 he inrolls the ICElab residency organised by the International Contemporary Ensemble. His work “Letría” was premiered by Arditti quartet in 2015. The ensemble Le Balcon premiered Vernacula Bailante for 21 musicians and electronics within the festival Berlioz in 2016.

The piece born from a shrill scream. The sound image of four giant vocal cords that resonate emiting an insane cry. The rest of the piece is the different articulations, gestures, amplifications, babbling and vestiges of the initial cry.

The initial melodic lines have narrow tessitures, which led me to associate them with the spoken word and recitation. The permanent variations, cuts, compressions of the initial ideas led me to relate them to the sonic poetry, in particular the situationist poetry, such as Issidore Isou’s.

The work was written for the Arditti Quartet, comisioned by the Teatro Colón in Bogotá. It is dedicated to Juan Pablo Carreño for his friendship and support.